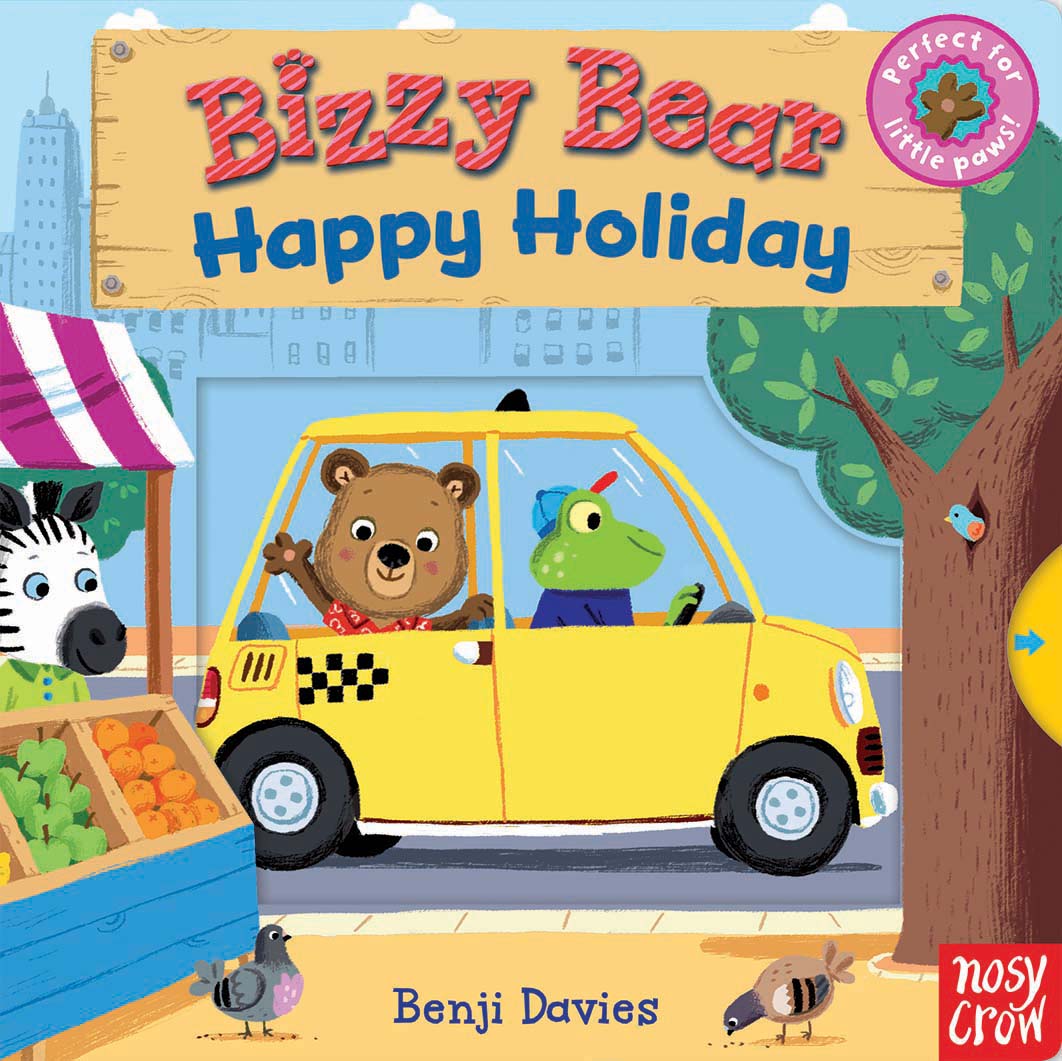 There’s a total of 11 books within the Bizzy Bear series, published by Nosy Crow, and this little fun slider book, Bizzy Bear Happy Holiday is definitely for the vehicle mad toddlers.

Bizzy Bear is going on holiday and to do that Bizzy Bear has to travel by taxi, train and a plane. Along the way, there’s lots of other types of transport to spot within the bright and colourful illustrations. Benji Davies doesn't disappoint with his cute animal illustrations and his attention to detail on all modes of transportation - making each vehicle recognisable and even cute to look at!

Even if there weren’t any moving sliders, there’s so many things to look for within the pictures. Of course, the sliding and push and pull parts offer little ones more fun and enjoyment in making Bizzy Bear move. A great sturdy little book which could easily accompany any little one on their own travels.

Bizzy Bear: Happy Holiday is available to buy in bookshops and on the Nosy Crow website. 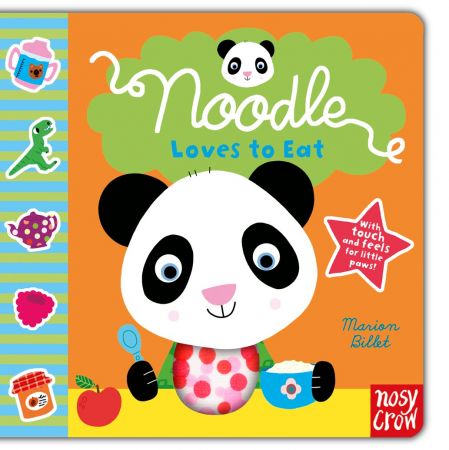 This little touch and feel book is very cute! Noodle Loves to Eat is for babies and young toddlers, and has little areas of different textures for little fingers to explore.

What I like most about this book is that its a lovely way of trying to encourage children to identify food and objects they may find about the house but maybe a way to help little fussy eaters.

Noodle is a baby panda who loves to eat and with each page we see Noodle enjoying a new food but I love how it ends; with a reflective mirror surface to reflect the child’s face, it reads; '...and just like Noodle, you love to eat!' This is a great way to start talking about food, asking what the child likes to eat and a nice way of introducing a new food to try.

There are 8 books within the Noodle touch and feel series by Marion Billet, all with lovely little topics, they would make great first time books for little ones.

Noodle Loves to Eat is available in bookshops and to buy on the Nosy Crow website.
Posted by Unknown at 23:15 No comments: 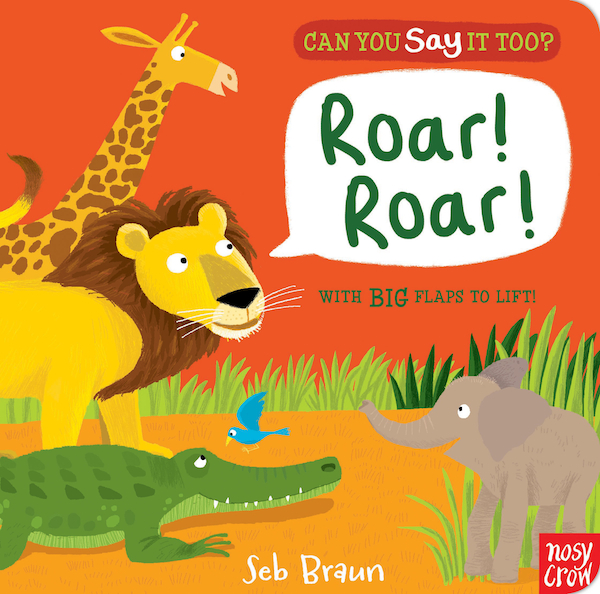 Before I had even opened this hard back book, I loved the cover, with such bold and bright colours, it definitely would make any child want to pick it up.

As stated on the front and back cover, Roar! Roar! has sturdy big flaps to lift and asks the question 'Can You Say It Too?' - Its been specially designed for children who are just starting to talk and for any little one who enjoys making animal noises! Its part of the Can You Say It Too? range, all of which Sebastien Braun has illustrated for Nosy Crow.

Each page spread asks 'Who’s that…' and the child is encouraged to pull down the flap to reveal the animal hiding, with words on the back of each flap introducing the animal and what sound it makes. I think this book, and the whole range, makes a lovely way of encouraging children to try to talk, introducing what each animal looks like, their name and learning about the sounds they can make. A lovely first book for the very young, recommended age 9 months+.

Roar! Roar! is available to pre-order in bookshops and from the Nosy Crow website.
Posted by Unknown at 02:56 No comments:

Email ThisBlogThis!Share to TwitterShare to FacebookShare to Pinterest
Labels: Age 9 months+, Can You Say It Too?, Nosy Crow, Roar! Roar!, Sebastien Braun 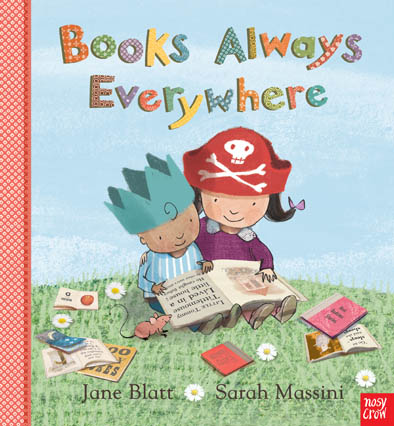 Wow, isn’t time flying by, with less than a week to go until my due date, our baby could come any day now and we’re getting excited to finally meet him or her.


I can’t wait to encourage a love of books and especially with this book, Books Always Everywhere, published by Nosy Crow certainly made me day dream about reading to my little one.  And as written on the back…'it’s never too soon to share a good book with your little ones'.


This hardback book introduces to young children, that books can be anything - from a chair, or a tower to a hat - but the best thing they can be is a book. With such lovely delightful illustrations by Sarah Massini, each page holds lovely engaging illustrations that would allow you to talk and ask the child about whats happening on the pages from building a house out of books to reading in bed with books and easy to mimic what is happening.

The words are few and very simple; Book big, book small, book tall etc. Though fewer words than your typical picture book, the words used are all first words that children are taught when they start school. This lovely little book makes a great way of introducing these simple, descriptive words and with such pretty illustrations, it will make it a delight to read to any young child.


Books Always Everywhere is available to buy in bookshops and from the Nosy Crow website. 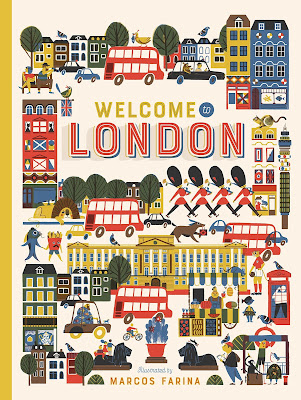